* Will Vinnicombe M0VWA arranged a short Jamboree on the Air session at the shack for a local scout group in early October. Greetings messages were exchanged with other Jamboree stations.

* Half a dozen potential new members visited the shack in October and borrowed copies of the licence exam books.

* Dan McGraw M0WUT ran a couple of technical sessions at Caius College covering the remote controlled radio station project and the use of oscilloscopes, signal generators, and vector network analysers for RF measurements.

* Temporary LF antennas have been erected near the shack. We have a 4 element steerable phased array for 7MHz and a single quarter wave vertical antenna for 3.6MHz. These will be removed by the end of March so the University Farm can cut hay for their cattle.

* We entered the CQWW SSB contest using our special callsign M4A at the end of October and made 3743 contacts. The claimed score was 4,689,314 and it looks like we probably won our Multi-op 2-Transmitter category for England.

* Past Chair, William M0WJE, entered the CQWW CW (morse code) contest in November with his own call and claimed just over 400,000 points.

* The special youth callsign GB22YOTA was used from the shack on December 2nd and 3rd and over 800 contacts were made around the world. The call is still available at various times until the end of the month if any member (or guest) under the age of 26 wishes to use it. Detailed availability is shown on qrz.com against the GB22YOTA callsign.

* Various special 1920s callsigns are available for all RSGB+CUWS members to book and use from the shack to commemorate the first 2-way trans-Atlantic contacts on HF. One also marks the first use of radio from a moving train! See https://rsgb.org/main/activity/transatlantic-tests/

* Finally the shack has been used recently for a number of 3-4hr short contests including:

– 1.8MHz AFS (6th out of 65) Congratulations to club member Rob M0VFC who went out portable and won this event.

– Sadly the shack location is not very competitive on VHF/UHF because of screening by Madingley Hill to the south-west but we can still get out well to Scotland and continental Europe. The 50MHz contest performance was boosted by some sudden Sporadic E propagation to the south-east.

It was a busy weekend at the G6UW shack. Firstly we had a visit from Greg MD0IGD a few years after graduating. 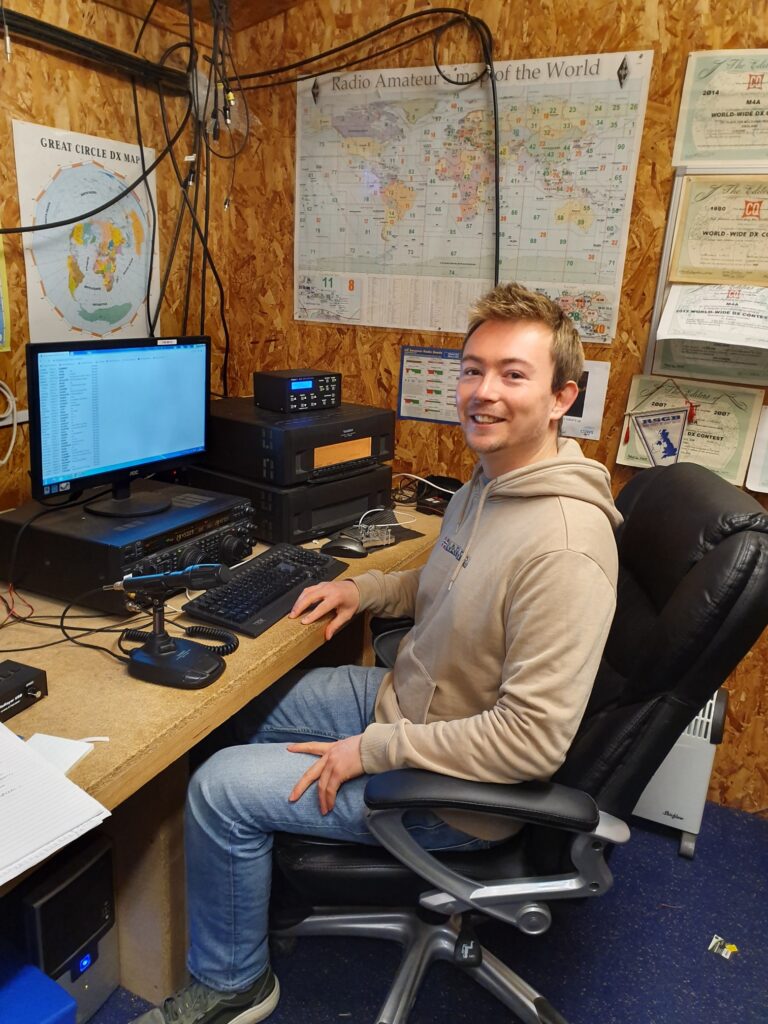 On Saturday afternoon Will Vinnicombe prepared for a visit by Bourn Scouts for Jamboree on the AIr. Greetings messages were exchanged with stations in Ontario, Chicago, and Oporto – including with another scout team. 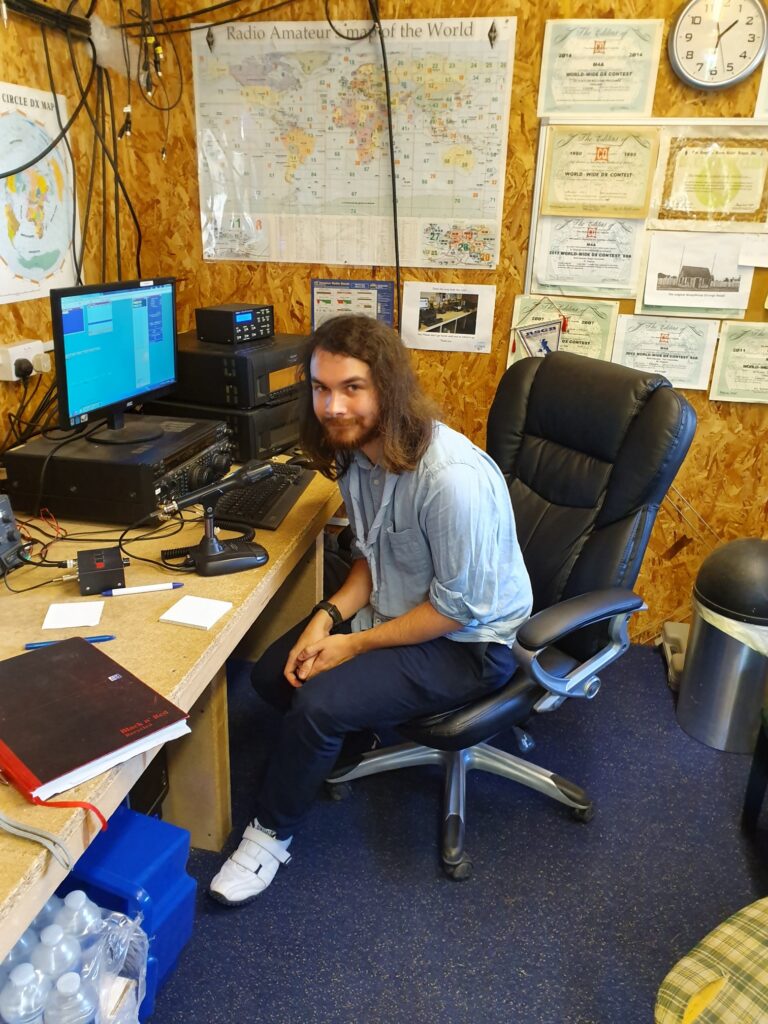 On Sunday morning Dan M0WUT and Martin G3ZAY operated G6UW in the 50MHz AFS contest. For most of the time there was just a little tropospheric propagation up to about 400kms but 30 minutes from the end there was some Sporadic E which yielded about a dozen contacts into central and southern Italy. 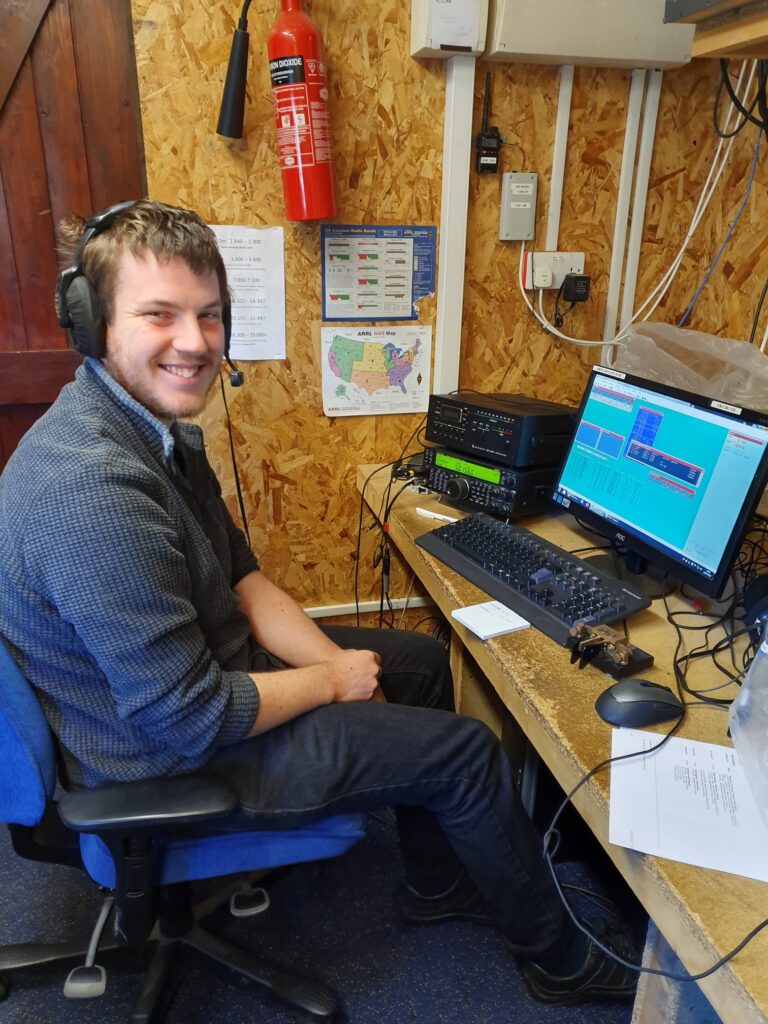 Finally on Sunday afternoon a team of 8 members erected a 40m 4-square phased array and a single 80m quarter wave vertical in the adjacent field.

Welcome back to Cambridge for the new term. The CUWS website calendar page has been updated to show a range of planned events coming up. For most of them please contact Martin via g3zay@btinternet.com for more information. For the technical/construction evenings on Oct 18th and 27th please contact Dan via dan.m0wut@gmail,com. There will be more information via our email lists in due course. To be added to a list you can either apply online through the university system or just email chair@g6uw.org. We have soc-cuws-active for those with a confirmed interest and soc-cuws-interested for those who would simply like more information.

The delayed (by Covid) 100th anniversary Dinner was held at Gonville and Caius College on Friday April 1st and was attended by 29 members and partners. Unfortunately several had to drop out at the last minute due to positive Covid tests. Covid lockdowns and delays meant that this was in effect the 101.5th anniversary of the formation of the Society at Caius College in 1920.

As so many people were unable to make the 2022 event we will be holding another Dinner on Friday March 10th 2023 – also at Gonville and Caius.

Pictures below by G7VJR (blurring due to very low light levels): 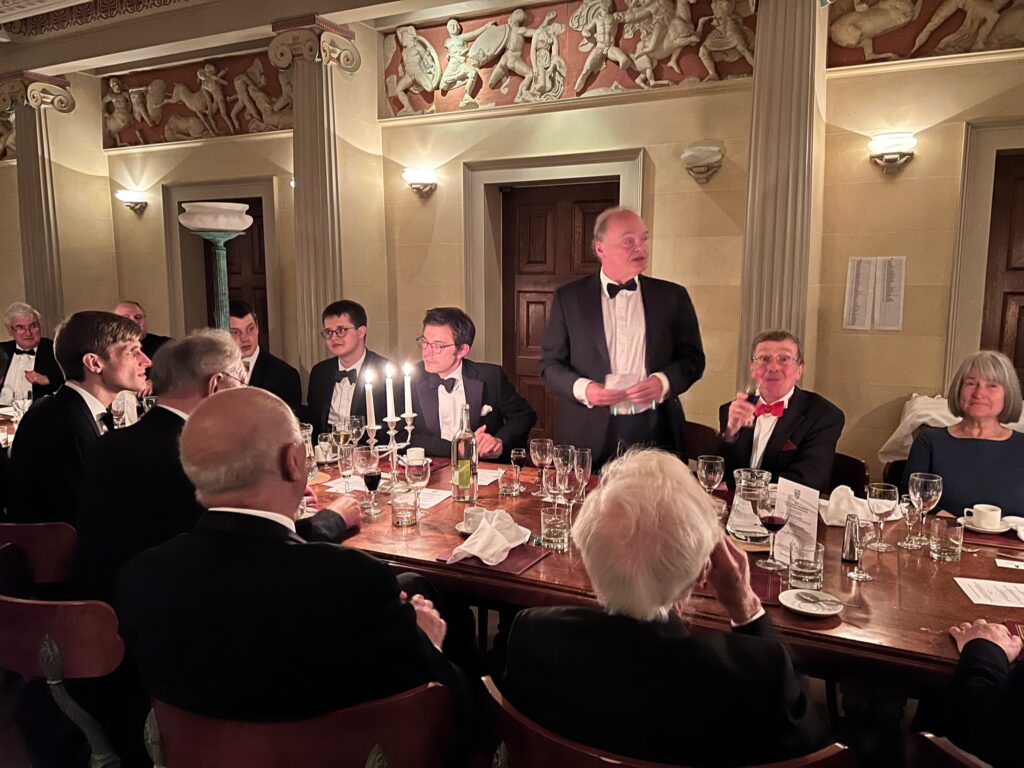 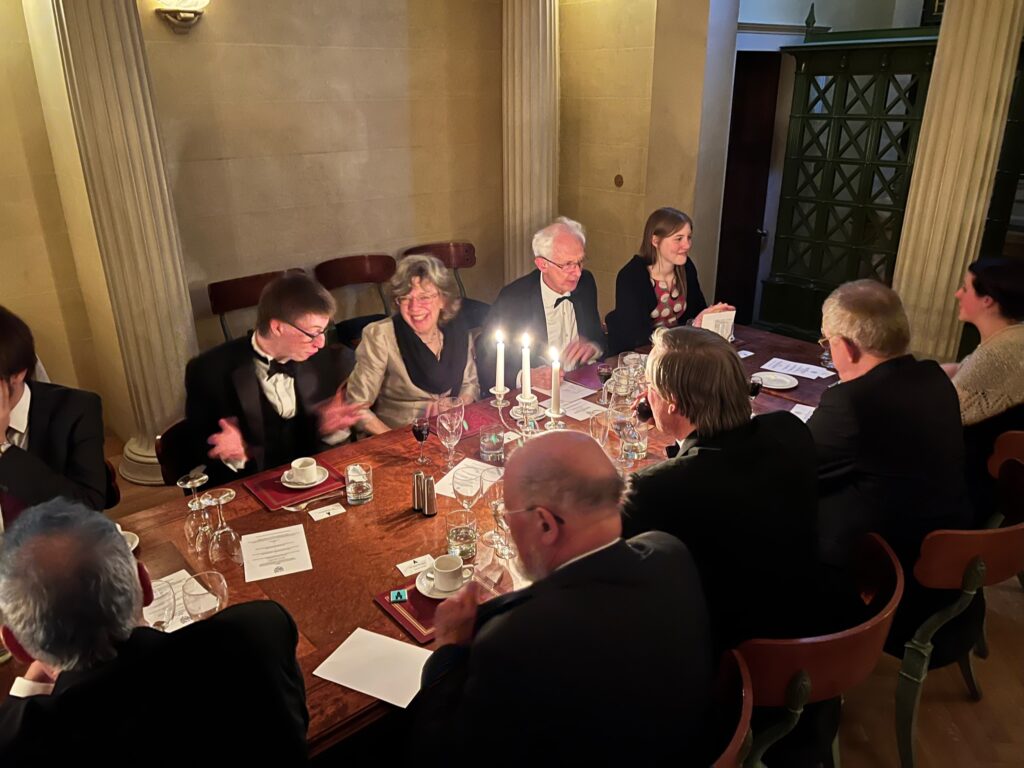 The team made 316 QSOs in the 1st round of the 2022 YOTA Contest. Conditions weren’t great during the day and there were very few contest stations on 40m. Most QSOs were made on 20m. 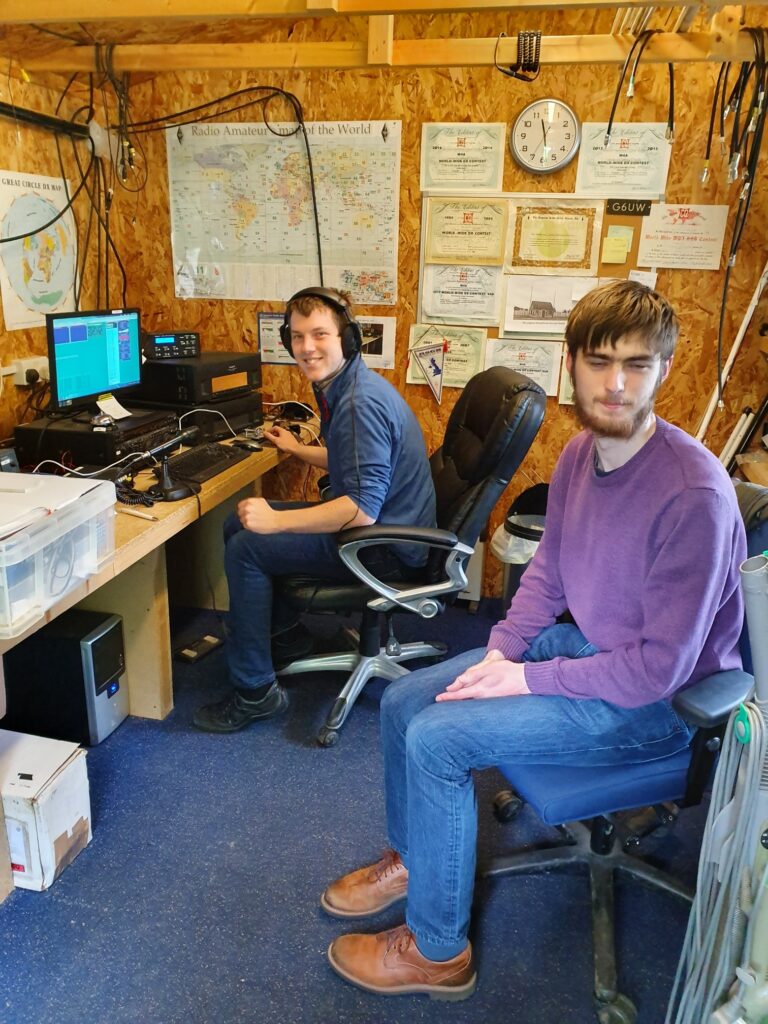 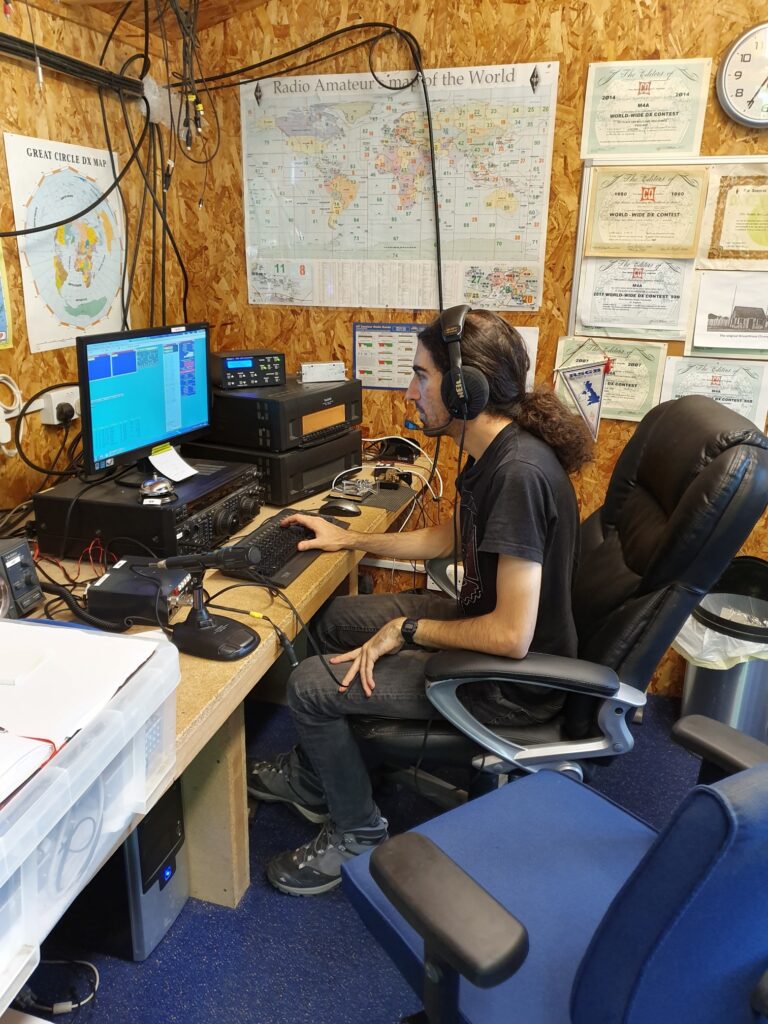 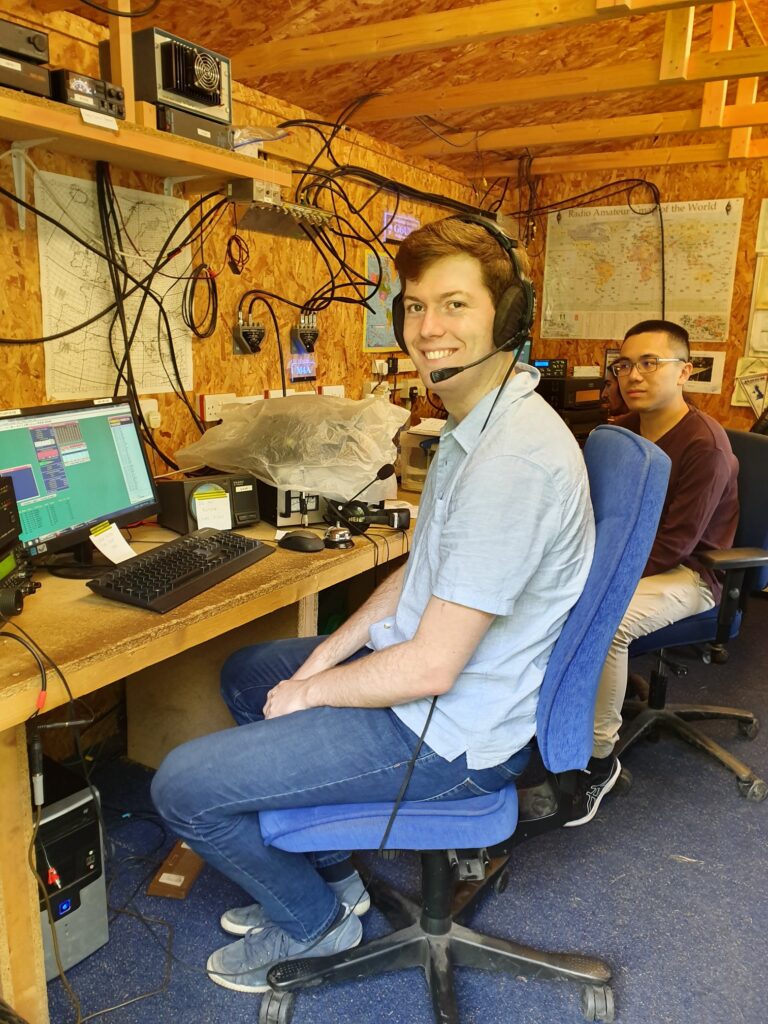 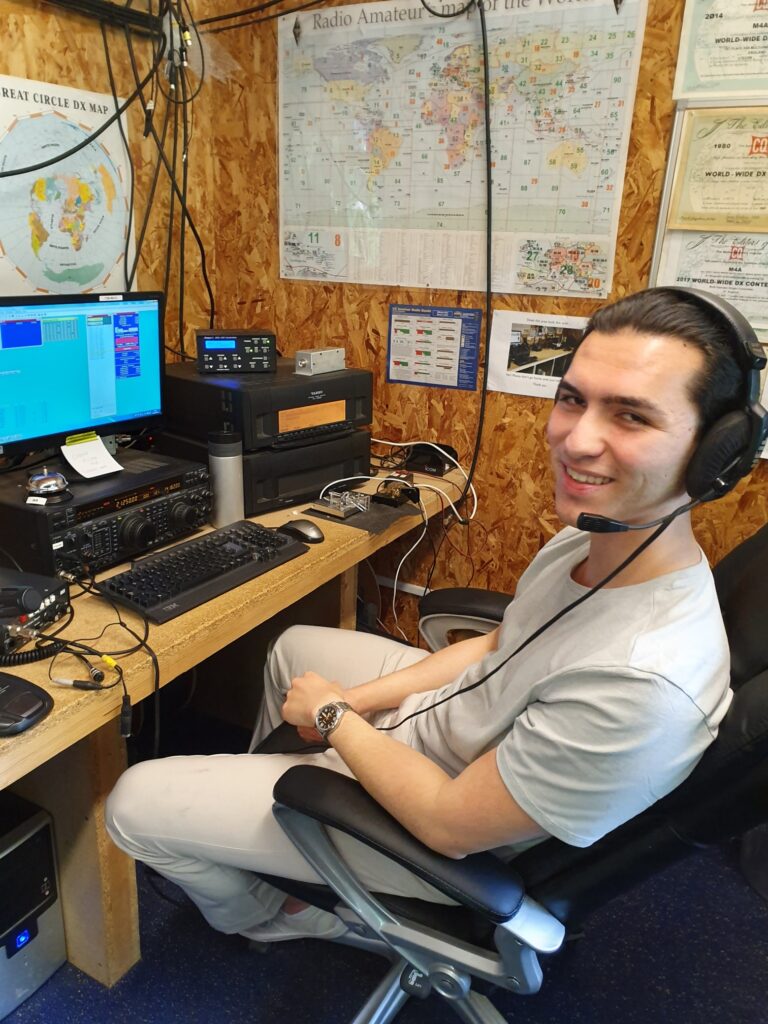 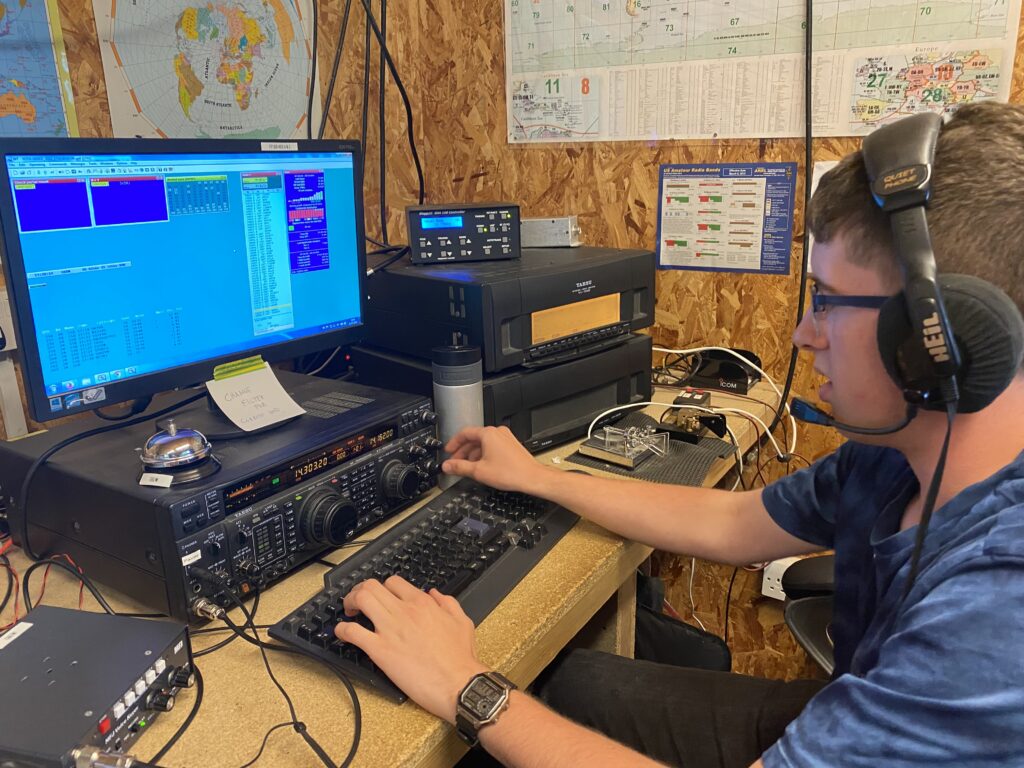 CUWS Chair Nikolas M0IPY was one of the first ops: 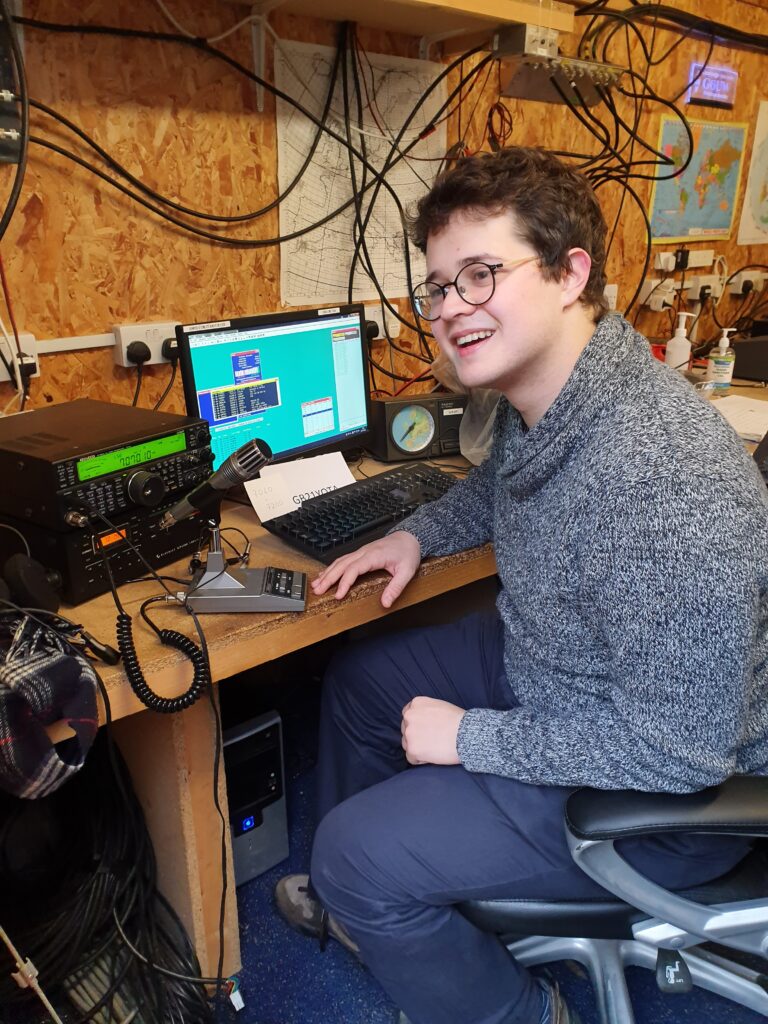 He was joined by Edwin M0RNN: 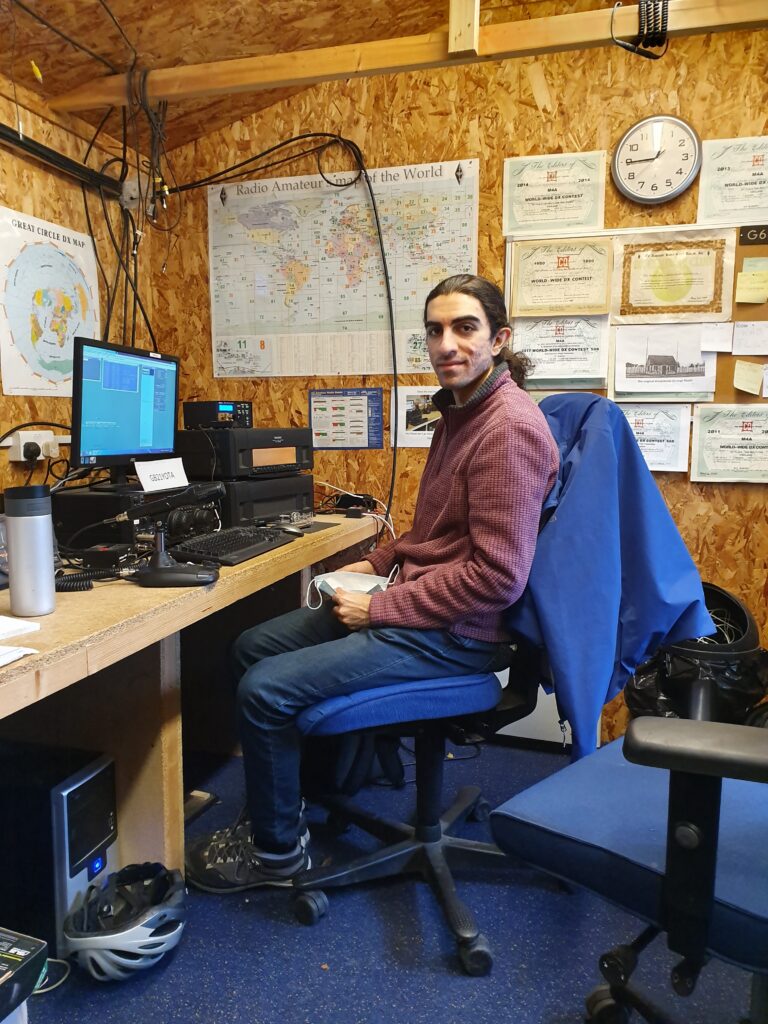 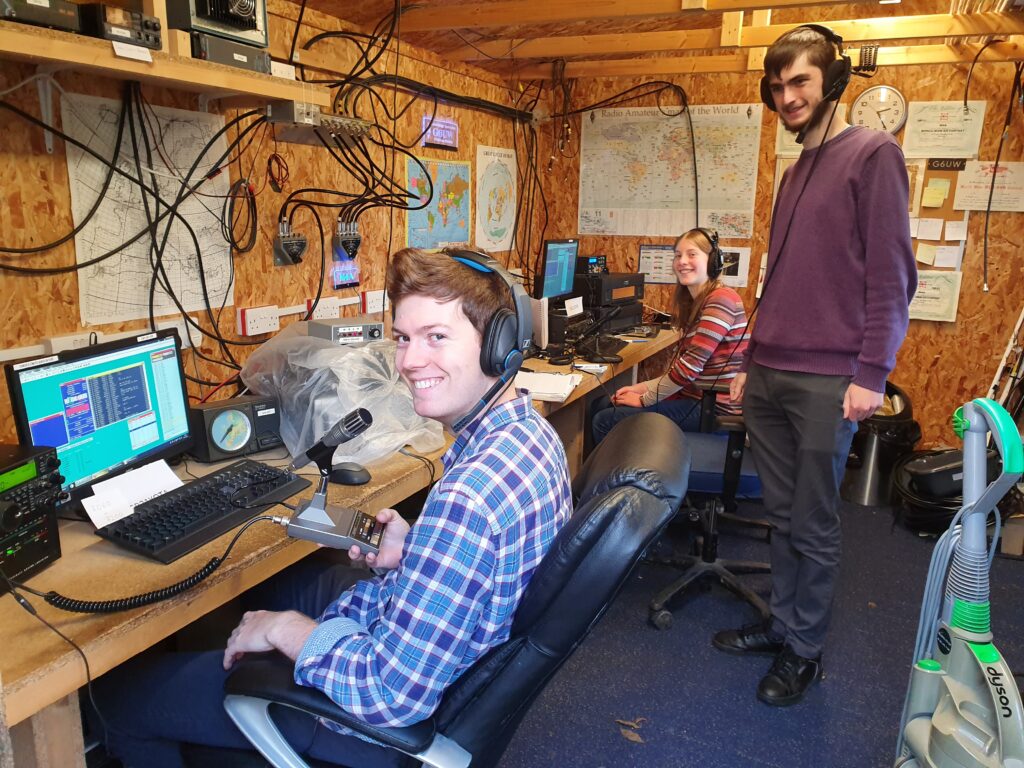 And the final shift was Dan M0WUT and Stephen M0UXP: 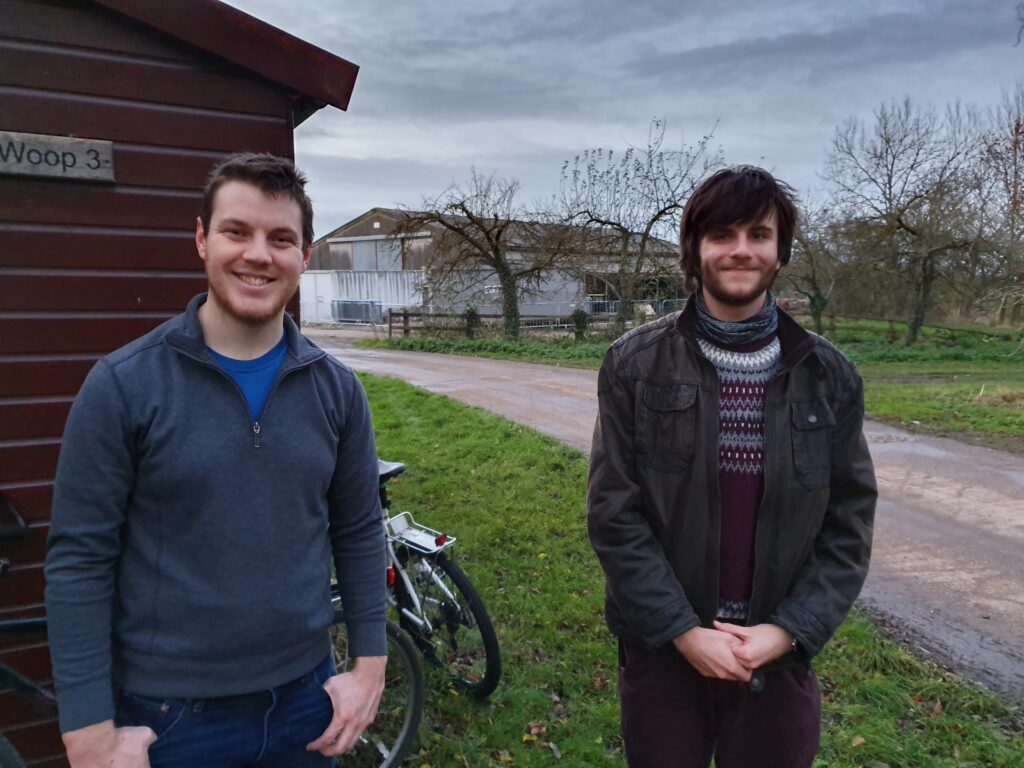 A team of 15 operators including 2 undergraduates, 11 alumni of various vintages, and 2 guests operated M4A in the multi-op single-transmitter category over the last weekend in October. Conditions were excellent with worldwide propagation up to 10m. Approximately 3500 contacts were made for a score of just under 4M points. 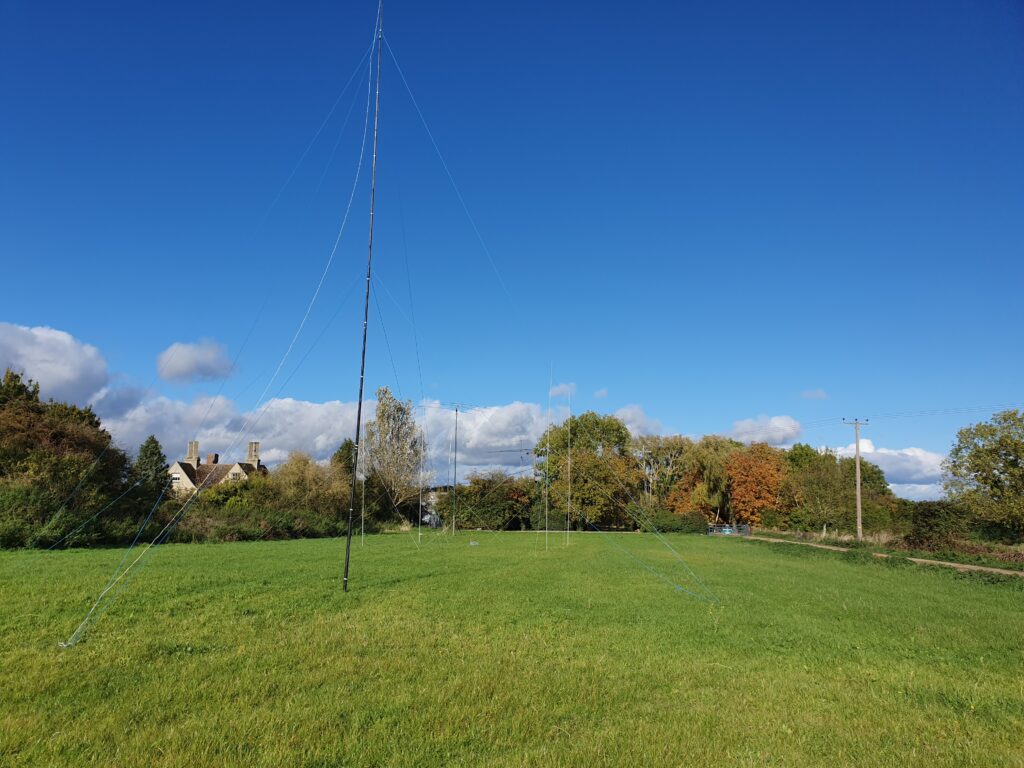 Welcome back for Michaelmas Term 2021. If you would like to receive more information about CUWS please email Chair@g6uw.org and ask to be added to our email list. Activities have been at a low level for the last 18 months due to Covid but we hope to reintroduce some meetings later this term. The radio shack remains fully available 24/7 and we will be doing a number of contests there during the term. Some are weekday evenings and others at weekends. Check the online calendar for more information. If you are interested in the radio licensing exams please email g3zay@btinternet.com. All exams are available online with remote invigilation and CUWS can lend you the exam manuals. 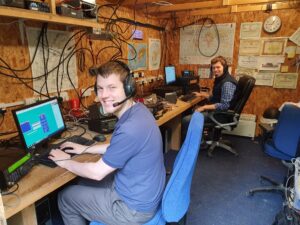 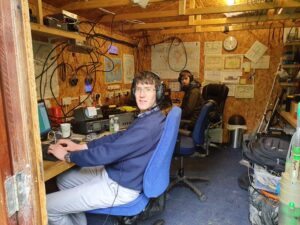 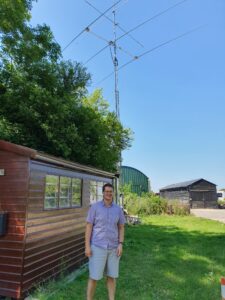 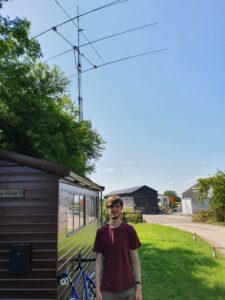 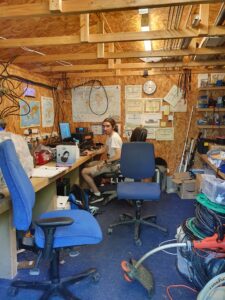 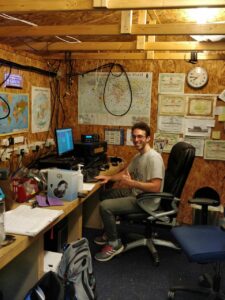 The final event will be December 30th if anyone is around. CUWS also plans to participate in YOTA month with the GB21YOTA callsign in early December.

CUWS was formed on October 13th 1920 so we are now 100 years old. We had planned a birthday dinner at Caius (our place of birth) in a couple of weeks time but Covid-19 put paid to that. Tentatively we hope to have a 101st birthday dinner on Saturday November 6th 2021. Please let Martin G3ZAY know if you are interested in attending – g3zay@btinternet.com.

Trevor Gill G8IBO found an interesting academic article about the early days of CUWS written by Jeff Hughes from Manchester University.  You can read it online at https://www.jstor.org/stable/j.ctv550d3p.17?seq=1#metadata_info_tab_contents

Trevor has also prepared a shorter history of CUWS based on Jeff’s and other material. 100 years of CUWS